Pharmaceuticals
The Pharmaceuticals industry (“Pharma”) has been undergoing several developments driving its recent performance.  In the years leading up to 2017, revenues consistently grew at an estimated 3.6% each year. Though the economy grew at a slow but steady pace throughout this time, it is likely that the industry’s growth was at least partly thanks to its acyclical nature – people need their medicine regardless of economic conditions – as well as the general aging of the population.  Furthermore, of course, new iterations of national healthcare legislation will likely keep a lot of the details of regulation and industry structure in the air for some time.  Still, this is only one of the many factors at play.

M&A Activity
As shown by the charts, consolidation activity in Pharma was especially strong in the latter half of 2014 through 2015.  Since then, however, both the number of deals and volume of investment has returned to historically normal levels over the last few quarters.

New Product Development Effects
Pharmaceutical producers famously experienced a “patent cliff” of many blockbuster drugs in 2012, followed by another smaller such “cliff” in 2015.  The ensuing period has seen a significant influx of treatments that compete directly with that of the original manufacturers.  Some estimates suggest that this phenomenon can deprive those original manufacturers of 90% of the revenues generated by their treatments.  There is therefore significant pressure on these companies to proactively find ways to replace significantly-sized revenue streams.

The two ways for Pharma operators to do this is through either organic growth (internal research and development) or through acquisition.  The R&D geared toward the former suffered from lackluster performance in 2016.  This consisted of declined approvals from the FDA as well as pipeline failures and underperforming new product launch volume.  Furthermore, it seems that it has become even more costly to conduct organic growth in terms of upfront investment and risk due to the costs associated with pharmacy benefit managers (PBMs).  All of these factors have been important to pointing to inorganic growth as an effective response to the industry’s headwinds. 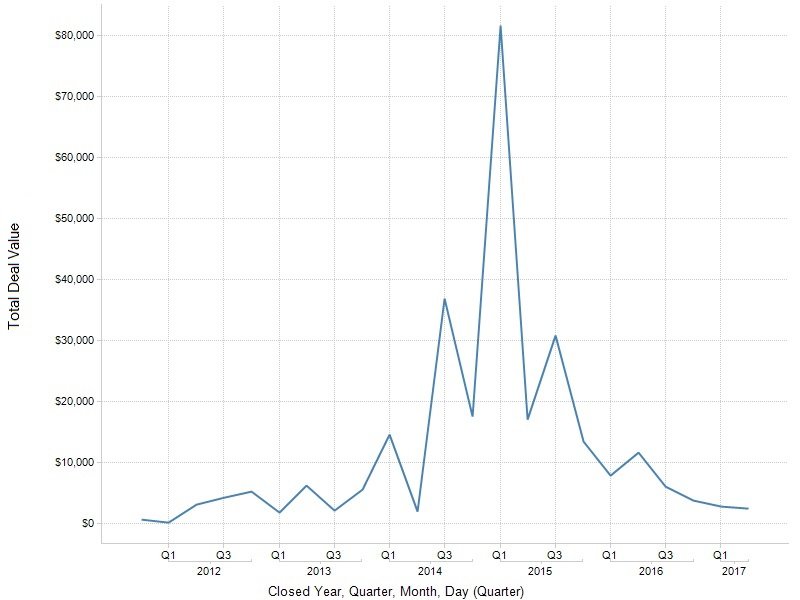 Taking a highly acquisitive approach to growth essentially outsources R&D costs for Pharma operators.  Because of this growing emphasis, there are a couple secondary effects on the nature of M&A activity conducted.  First, and most obviously, the valuations for targets have gone up dramatically in recent years.  The cost for such targets, as a multiple of revenue, more than doubled in each of 2015 and 2016 (x8 in 2014, x19 in 2015, x39 in 2016).  This is likely also partly due to the market’s cheap credit.  Though credit will likely rise in cost somewhat as the Fed is expected to tighten monetary policy, credit will still remain relatively cheap for some time moving forward.  It will continue to abet Pharma companies’ acquisitive strategy.

The other secondary effect is that the stage at which targets are pursued is bowing outwards.  Because the mid-stage is where heavy investment in treatment development is being made, suitors generally approach targets on either side of this period.  That way, the target either gets financing for its development stages or gets rewarded for successfully completing development.  The market for late-stage asset companies are already quite competitive, so more early-stage acquisitions are being made.  There is indeed higher risk associated with them, but they are still far less competitive than their late-stage analogs.  Also, typical early-stage targets either have a more predictable path through testing or are working on especially attractive vanguard treatments such that their additional risk is worthwhile.

Possible Significant Changes
The hawkish approach the Trump Administration seems to have on controlling prices may have a severely negative impact on Pharma.  Having already made good on several campaign promises, it appears that President Trump may be pivoting to his promise to lower Pharma’s drug prices, and the market is reacting accordingly.  On the other hand, allowing for cash repatriation and business-friendly tax reform could prove a massive boon.  Totaling an estimated $98 billion in offshore holdings, Pharma companies generally have strong cash reserves on their balance sheets, and being able to deploy that cash to enable inorganic growth could be a significant factor in the industry.  It is not definite whether changes will have positive or negative effects on the industry overall, but most analysts are optimistic.